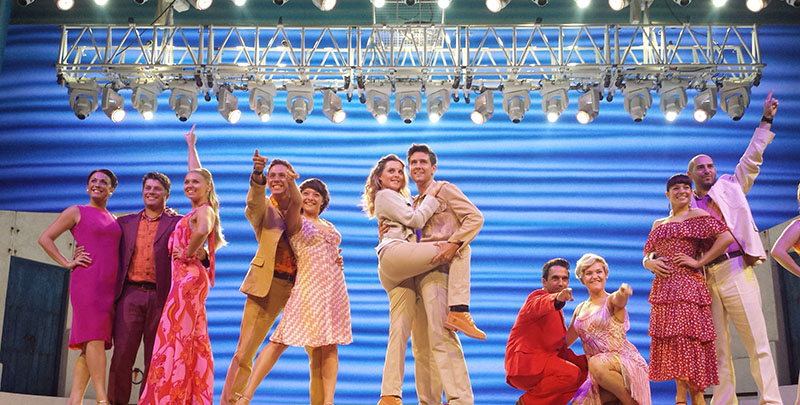 The cast is beautiful, almost too beautiful to be real; and that’s the point. You don’t buy tickets to “Mamma Mia!” to experience anything less than a captivating spectacle in platform shoes and winged jumpsuits. The international production of “Mamma Mia!” has returned to Hong Kong after 10 years for a six-week run starting tonight at The Hong Kong Academy for Performing Arts. A full dress preview earlier today dazzled with its brilliance, from the set that pops against the earth-tone costumes (minus those jumpsuits) to the electric numbers that still give goose bumps to Abba fans. The international production is a polished machine after more 2,400 performances seen by 54 million fans in 39 productions and 14 different languages. With that many miles on the road it’s a wonder there is any tread left on the tires. The show’s Associate Producer, Nick Grace, says success was uncertain when producers of the original West End production asked him to launch the international tour 10 years ago. The challenge was to bring a show packed with Abba songs to a global audience without it appearing to be a tribute show or musical biography. 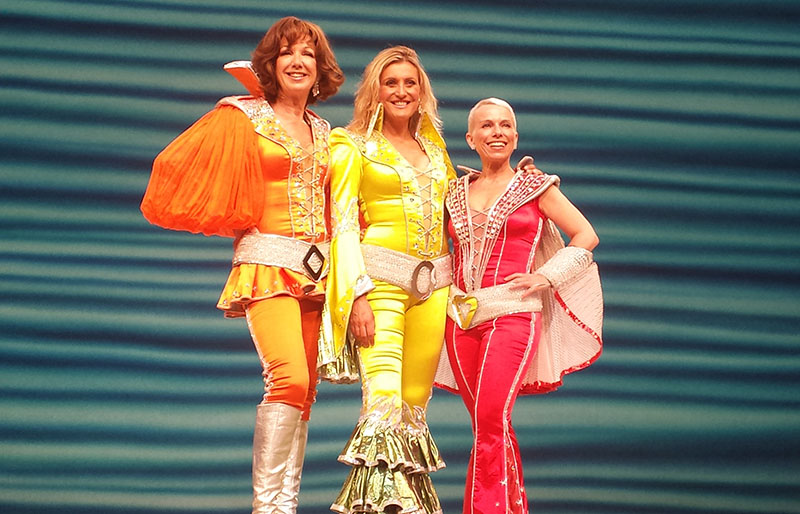 The irony, Grace says, is that the familiar songs are refreshed in the context of the story about a mother, a daughter, and her three possible fathers. “Every song tells a story. They drive the story forward.” The ongoing success of “Mamma Mia!” has improved on a massive scale since the 2008 movie version brought the musical to households around the world, expanding audiences previously consisting of mothers and daughters, Grace says, to entire families now filling the seats. Grace also mentions that 1 in 3 households in the United Kingdom owns the DVD, meaning even more people enjoy the storyline. Grace’s “Mamma Mia!” continues to appear fresh with quite possibly the most attractive cast in the business thanks to each cast member signing a one-year contract that ensures turnover. However, Grace is quick to point out the complicated nature of a touring show and decisions to leave the production based on private concerns such as cast members deciding to return home to family and friends after a year on the road. After their contracts are up, some cast members do opt to be considered for their current roles or continue with the production as different characters.
A small preview from today's press conference.
Life off-stage during a yearlong run is also a unique aspect of the show for the cast. Unlike Broadway or West End productions, Grace explains, the cast focuses on the production for more than just a few hours at a time due to a busy travel schedule, shared hotels, and the adventurous energy connecting them as a troupe. Grace cannot imagine the international production will slow down anytime soon since it is booked to appear in cities around the globe for another four years. After Hong Kong the show will move on to Singapore for five weeks and then return to Kuala Lumpur for a week. Even with a full schedule, including his position as Executive Director of “Batman Live”, Grace doesn’t show any signs of loosening his grip on “Mamma Mia!” “This is my baby.” Click here for tickets and showtimes.   Got anything cool you'd like Localiiz to share? Send us your stuff!