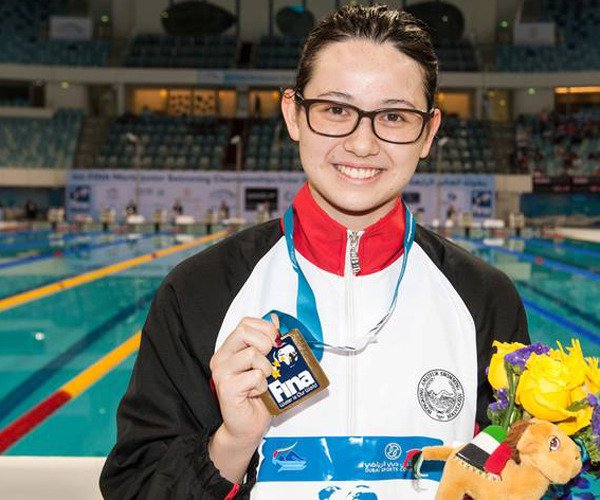 The 15-year-old set a new meet record in the 100 metres freestyle, clocking up an incredible time of 54.47 seconds. She also re-broke the Hong Kong National Age Group Record for 15-17 year olds, which she set earlier in the semi-finals, and came within a 10th of a second of three-time Olympian Hannah Wilson's overall National Record. She even beat 16-year-old Lithuanian Ruta Meilutyte, who holds six European records, three world championship Golds, an Olympic Gold and two World Records. Siobhan trains at local swim school Harry Wright International. Her coach, Michael Fasching, said he is “very proud to have prepared another swimmer to compete with great success at the highest international level.” Director of swimming Jayne Wright added that Siobhan’s time “was so fast that it would have put her in the finals at the recent adult FINA World Championships in Barcelona.”

The Junior Championships took place in Dubai between August 26th and the 31st. It marked Siobhan’s first international swimming competition, but will certainly be the first of many for this young and talented teenager.