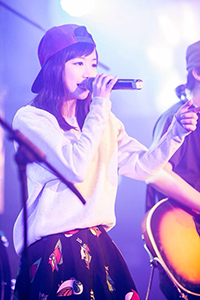 Kiki Tam is like durian, you know if you're a fan from your first taste. At least, that’s what she told us when we sat down with the 24-year-old rapper whose first song, ‘Facebook Lover’, gained her an equal number of thumbs up and thumbs down on YouTube. Regardless of that mixed response, the born-and-bred Hong Konger has come a long way since her rap debut two years ago, all the way to the big stage at tonight’s free Guinness Ampify concert where she will perform in front of 1,000 fans of local musicians. Despite connecting with hip hop in high school, Tam never dreamed of becoming a rapper. What started as “a bit of fun” evolved into a talent that earned her the moniker of Hong Kong’s 'First Lady of Rap', secured her appearances on TVB and RTHK, and kind words from her fan and mentor MC Jin. Tonight she joins a line-up of four local and Taiwanese singer-songwriters at Guinness Amplify, which aims to shine a light on up-and-coming stars while helping them sharpen their teeth in the music business. “Traditionally, Canto-pop singers like Kelly Chen have only ever featured one or two lines of rap in their songs, but I wanted to take on rap entirely and bring it to a new audience in Hong Kong,” Tam told Localiiz. So what can the audience expect from her performance? “Hong Kong hip hop has a big audience but is still considered underground," Tam said. "I think people still have the mentality that hip hop is rebellious but I want to show them that this is not the case. Hip hop can have a lot of different meanings, showing all sides of life in Hong Kong, from life to love and friends. I’m excited to bring this message to the audience whilst representing the post '90s mentality.” That's not all she has in store for her fans tonight. Tam plans to surprise them with two new solo songs during her 15 minute set at KITEC Kowloon Bay tonight. For more information check out the Guinness Facebook page.