March 30th 2013: Hong Kong winger Tom McQueen says he is “beyond flattered” at being touted for a place in The Barbarians side for their upcoming match against the British & Irish Lions in Hong Kong. By Crystal Wilde 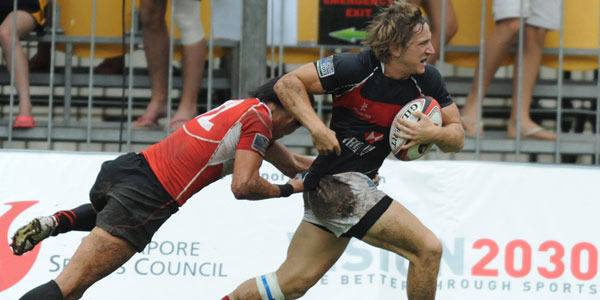 Lions head coach Warren Gatland said Tom McQueen’s performance at this year’s Sevens tournament could see him picked for the June 1st fixture that will kick-start his team’s 2013 tour of Australia. “I was really impressed by Hong Kong’s performance in the Sevens,” Gatland said, “particularly Tom McQueen. It would be brilliant if one or two of the Hong Kong players got selected for the Barbarians side, and I’d say he has the best chance of the bunch.” Gatland, who is also head coach for the Welsh national team, made the comments while unveiling the 125th anniversary Lions jersey at the adidas Sport Performance Centre in TST. The match against the Barbarians, a legendary invitational Rugby Union side consisting of the best players from around the world, will mark the Lions's debut in Hong Kong. Speaking exclusively to Localiiz, 23-year-old McQueen said he is thrilled by Gatland’s comments, but that he won’t be getting fitted for his Barbarians shirt just yet. “It's beyond flattering, but at the same time I don't know how much you can read into it,” McQueen said. “It would be a dream come true to play against the Lions and with the Barbarians, but the Barbarians have an all-star team, incomparable to any in the world. If I got picked for them I'd be playing with some of the best players in the world,” he continued. “I'd be pretty excited but also pretty intimidated.” McQueen, who plays for Hong Kong alongside his brother Alex, has represented the country of his birth in the Sevens five times since 2008, only missing the 2011 tournament due to injury. Despite a bout of food poisoning and Hong Kong receiving a thrashing from England in the Bowl final of this year’s tournament, McQueen says the team couldn’t help but enjoy themselves. “The atmosphere is always awesome at the Sevens because both the locals and the foreigners gun for you,” he said. “Our final match against England was one of the only times you’ll ever hear England being booed by their own fans.” Despite being proud of his team’s 2013 Sevens performance, and particularly their back-to-back wins against Argentina and the USA in the quarter and semi-finals, McQueen, who also works as a trainer at North Point’s Coastal Fitness, said they took their eyes off the ball in the final. “We started slowly and when you let a good team like England score four tries in the first half you're fighting an impossible battle to get back into the game,” he told Localiiz. “I'd like to be able to blame the food poisoning, but England is a really well organised team, and if you make that many mistakes they're just going to take it away from you every time.” But with the Sevens now over for another year, Gatland, himself a former New Zealand international, is hoping Hong Kong rugby fans will keep the vibe alive and turn their attention to the Lions. “It was my first time at the Sevens this year and it was such a fabulous atmosphere,” he said. “We want to come to Hong Kong and make June 1st like the Sevens and fill the stadium.