By crystal_wilde 21 May 2014
share:
Thanks to HKWalls, Hong Kong’s first annual street art festival, the little corner of Sheung Wan around the Localiiz office has become altogether cooler and more colourful. As we toured some of the awesome work created, we grabbed a quick word with visiting British painter D*Face about Hong Kong’s infantile urban art scene and his first solo exhibition in Asia. 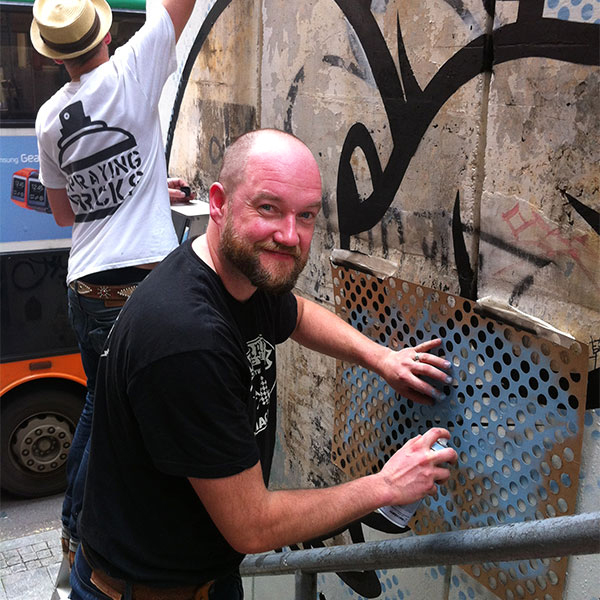 Although there have been some lame graffiti attempts around Sheung Wan’s Blake Garden for some time now (is everyone familiar with the delightful ‘Mom’ and ‘Pop’ motifs?), we were thrilled to hear that some of the neglected walls close to the Localiiz office were to receive a serving of quality street art, courtesy of HKWalls. Organised by HKstreetart.com and inspired by festivals such as Wynwood Walls in Miami and Pow Wow in Hawaii, the inaugural event kick-started a mission to enhance Hong Kong’s artsy antique streets with vibrant wall murals created by some of the best-known local and international urban artists. 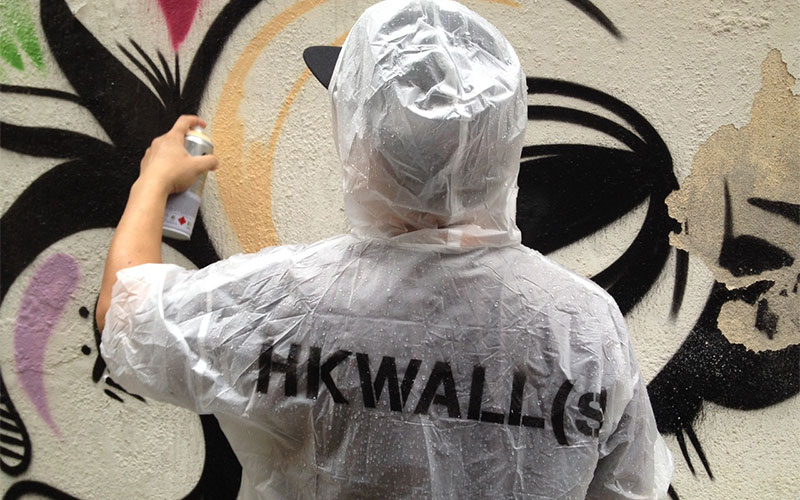 Working hard in the humidity between May 12th and 18th were (among others) Cathlove, XEME and Parent’s Parents from Hong Kong, Above from USA, and Mark Goss, Used Pencil and D*Face from the UK. We bumped into D*Face (aka Dean Stockton) - whose unmistakable "aPOPcalyptic" style has seen him rise from a teenage tagger to an internationally acclaimed contemporary urban artist – as he worked on one of his famous winged ‘D-Dog’ characters on the steps of Tank Lane. D*Face a.k.a Dean Stockton Urban Contemporary Artist from Moon Shadow on Vimeo. Having travelled with his work all over the world, Dean observes that Hong Kong is markedly behind the times when it comes to appreciation and proliferation of street art. “I see a lot of stickers and tags but not much else,” he said. “At the moment Hong Kong doesn't seem particularly receptive to street art, so it must be hard for the artists to get out there.” The Londoner, who is on first-name terms with the infamous Banksy, also spoke of his disgrace at the Hong Kong government’s decision to remove almost all retro-style ceramic works of renowned French street artist Invader after he sprinkled his magic across our city earlier this year. “It just typifies the mind-set here because the government completely misread how the public would feel about it.” 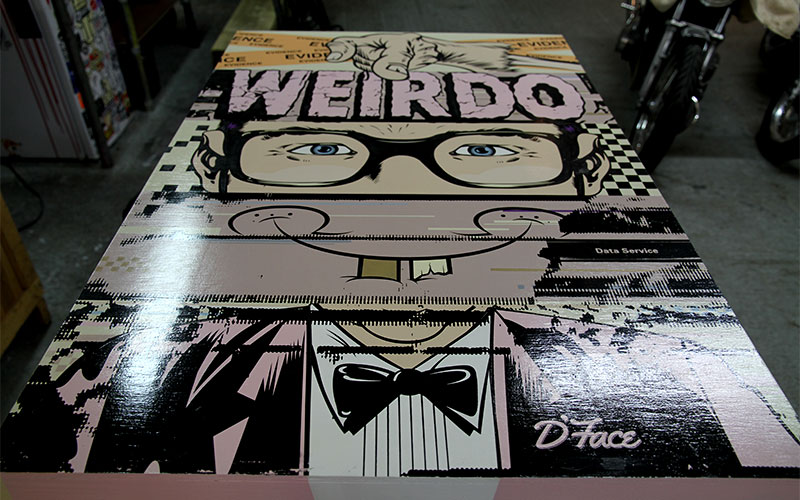 Although last year Dean spent a lot of time on the streets, painting murals in New York, Puerto Rico, Tokyo, Las Vegas and Malaga (his biggest to date at 120ft-high), he also regularly exhibits in international galleries, with Hong Kong urban-art advocates Above Second (9 First St, Ground Floor, Sai Ying Pun) being the latest to receive him. His first solo show in Asia, Dean’s new body of 18 original works, assembled from images he recalled under hypnosis, will be on display until July 6th. But despite selling his pieces for thousands in the world’s most prestigious auction houses, having collaborated with Christina Aguilera on her Bionic album cover, and remaining the only urban artist to have his work featured on the front cover of fine art publication Art Review, Dean insists his heart will always be on the street. 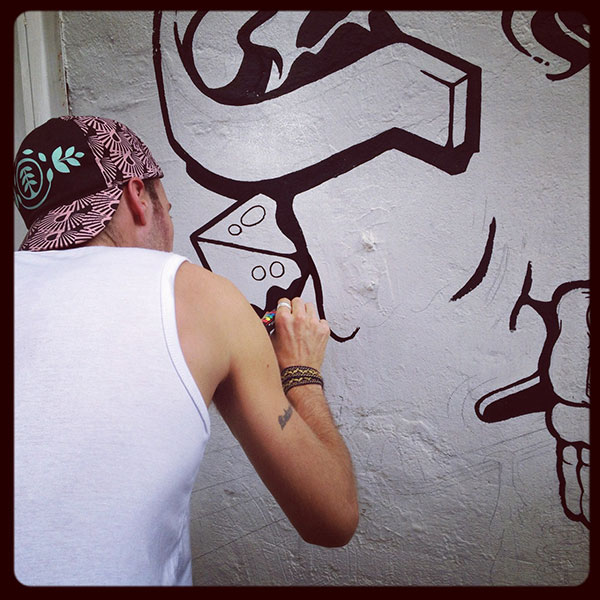 “When I first tried it [gallery work] it felt wrong because it seemed like the art was losing its context. Now I always keep the thread of the character [D-Dog] in my work, even if it’s just the wings, so people can make connection to the origins.” Having already seen a positive effect on our neighbourhood, we at Localiiz are with D*Face and the organisers of HKWalls in hoping the festival will inspire more love for, and a greater spread of, street art in Hong Kong. 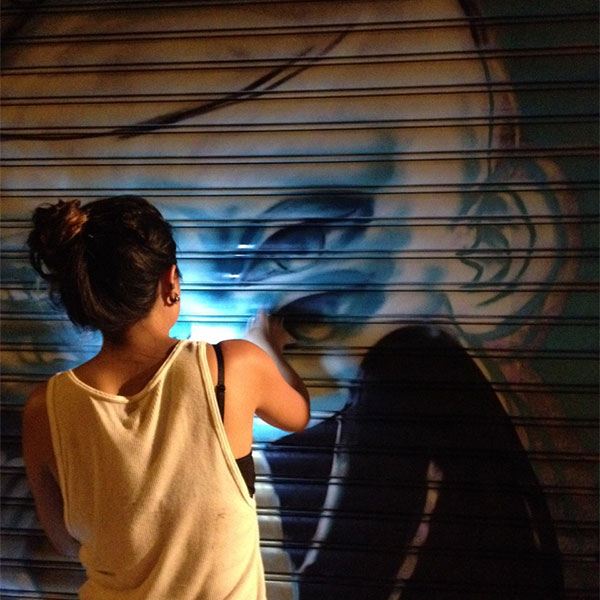 “There are loads of walls and places to paint, so if the attitude could be changed it could be an incredible city for urban art,” said Dean as he mopped his brow in the heat. “The great thing about street art is that it's got no demographic. It's loved by kids, old people, black, white, it doesn't matter - it's universal!” See D*Face’s HONESTLY/DISHONEST exhibition at Above Second until July 6th 2014.

Taco-Bout A Time Lapse! Watch Art Come to Life at Hong Kong's BrickArt Jam May 12th 2014: Here’s a treat for all the artsy Hong Kongers out there. Instead of the generic city or nature time lapses we’re so used to seeing, watch a graffiti mural come to life in less than a minute! Courtesy of Brickhouse, this video is just a sneak peak of the creativity (and tequila) that went down at their BrickArt Jam event on April 19th.

Forget First World Problems - Take a Look at Hong Kong's Illegal Microapartments May 9th 2014: Our densely populated city is well known for its ridiculously high rents and its tiny homes. But do you really know how tiny they get? Stop saying that you don't have closet space! To open your eyes, the Society for Community Organization (SoCO) have produced these photographs highlighting life in HK's microapartments.

Always On - The Timeline of Neon Signs in Hong Kong March 31st 2014: Neon signs are an integral part of the iconic make up of our city. But as their numbers dwindle under accusations of tackiness and the Buildings Department's Validation Scheme for Unauthorised Signboards, they could soon cease to be a staple part of Hong Kong's cityscape.

Erasing the Invasion: Is There Room for Public Art in Hong Kong? March 24th 2014: As many of you may have noticed, our city was recently infiltrated by renowned French contemporary artist ‘Invader,’ famous for his mosaic graffiti pieces of the popular 1978 arcade game Space Invaders. If you didn’t get the chance to view the pieces in person however, you may have to make do with photographs. 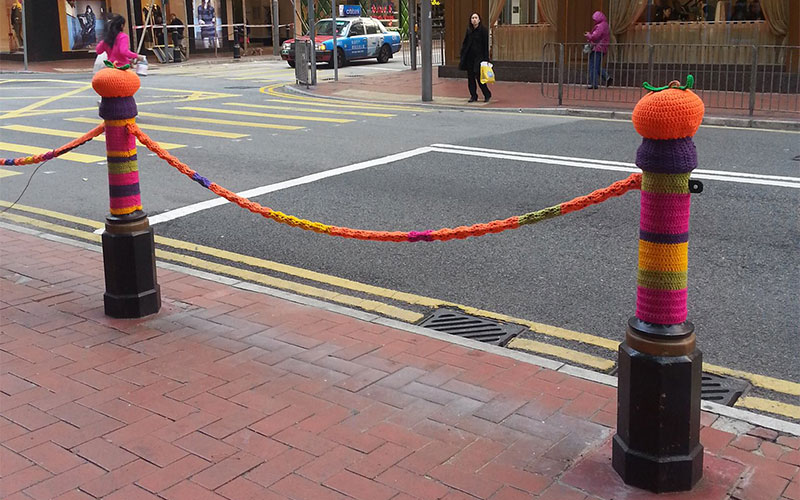