Sitting on a chair in the empty studio of Chinese Kung-Fu International School in Tsim Sha Tsui, I nervously eyed an array of weaponry in the corner of the room. I was entering this world with my guard down, awaiting the arrival of the Ultimate Fighting Championship (UFC) fighters of tomorrow night’s ‘Fight Night Macau’ and having little previous knowledge about the UFC or Mixed Martial Arts (MMA) in general.

After briefly indulging in unrealistic scenarios where I could take down one of the fighters arriving today, they finally walked through the doors. Large and ripped with muscles, the fighters confidently strode in to the studio, their camp in tow. The posse of lethal humans included Michael Bisping, Cung Le, Dong Hyun Kim, Tyrone Woodley, Alberto Mina, Elizabeth Phillips, and Milana Dudieva. A week from their matches, the fighters were focused, here to learn the art of Wing Chun, a form of martial art, from Master Sam Lau, a first generation disciple of Grandmaster Ip Man, Bruce Lee’s mentor.

The fighters wandered around the studio, like living avatars, awaiting Master Lau. Dong Hyun Kim and Michael Bisping inspected the weaponry, grabbing nun chucks and bamboo poles, however seeing Cung Le pan the room with a Go Pro, I saw a glimpse of life away from Octagon©.

When Master Lau arrived, the fighters dutifully gathered, ready for an in depth lesson from with the barely five-foot, 67-year-old ‘sifu’. Taking a hands-on approach, Master Lau sparred individually with the fighters, using the martial arts skills that Bruce Lee himself once learned to quickly force the six-foot Alberto Mina against a wall. “Hit and block with each movement,” he repeated to the fighters.

It was Hong Kong’s martial arts culture made famous by Master Lau and his fellow masters that drew Mina from his native Brazil. Residing in Hong Kong since 2012, Mina is the first UFC fighter to come out of the fragrant harbour. Currently a trainer at Central’s EPIC MMA Club, the fighter fell in love with the club at first sight.

“I was really impressed with the names of the instructors and the pictures of the facilities. Hong Kong as a city also really captivated me and I loved interacting with the people. So I guess you can say that not only did I choose the city but also the city chose me,” Mina told Localiiz.

Long-time UFC fighter Cung Le, also shares a Hong Kong connection through his work in King-Fu films. “Donnie Yen requested me to be in Bodyguards and Assassins and it was a lot of fun. He said he was a big fan and wanted to work with me because I’ve done a lot of movies in the past.”

Not to push Yen off his pedestal, but he’s not the only thing that ensured Le returned to Hong Kong. “I love the people the culture and the food. My favourites are salted baked prawns and of course wonton noodles.” Don’t we all? I doubt their diets currently allow for too many wontons, but perhaps after the fight a treat is in order.

Despite Hong Kong’s temptations, these professional athletes are now in the zone, concentrating on nothing other than their upcoming fights. Seemingly superhuman to the average human being, it’s hard to imagine that these men experience nervousness in the slightest. However, being that this is Mina’s first ever UFC bout, we wondered what was going through his mind.

“Representing Hong Kong as the first signed UFC fighter fighting out of the city brings me a lot of excitement and at the same time a lot of responsibility. Our fan base in Hong Kong is growing and want to do well and make them happy,” Mina explained.

The odds seem in his favour, holding a 10-0 record. “My only loss was in [the film] Unbeatable. I will work hard to keep it this way, because I really didn’t like the feeling…even if it was just a movie.” 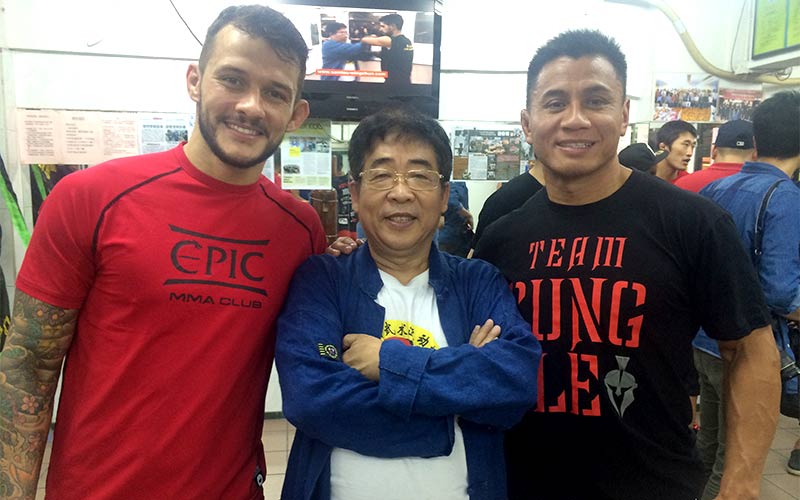 The UFC veteran Cung Le oozes confidence when discussing his upcoming match with Michael Bisping. Despite the younger challengers in the UFC sphere, the 42-year-old Le is still one of the top fighters in the sport. “My age hasn’t played any factor. The great generals in history, they weren’t young, but they’re still winning battles and they’re still winning wars. I consider myself to be a great general. I consider myself a general and I’m going to win this war.”