Erasing the Invasion: Is There Room for Public Art in Hong Kong?

By Localiiz 24 March 2014
share:
March 24th 2014 As many of you may have noticed, our city was recently infiltrated by renowned French contemporary artist ‘Invader’, famous for his mosaic graffiti pieces of the popular 1978 arcade game Space Invaders. If you didn’t get the chance to view the pieces in person however, you may have to make do with photographs, as Hong Kong’s Highways Department responded by promptly removing the work. As Hong Kongers bid goodbye to yet another example of high calibre street art, Stasia Fong asks where vandalism ends and art begins. 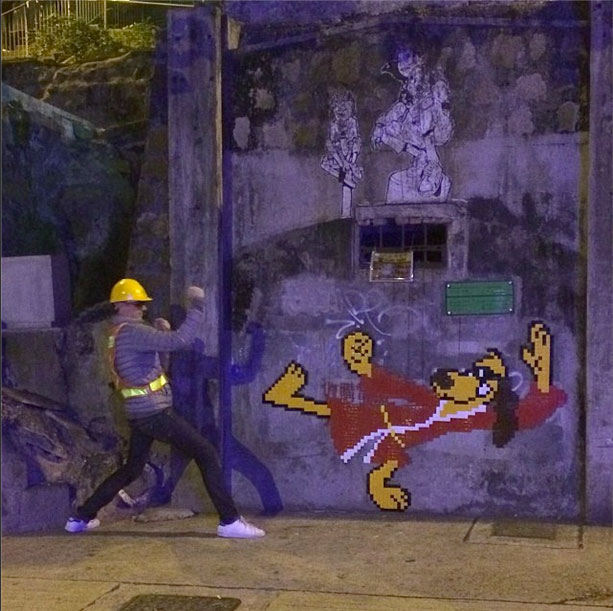 The Invader’s third Hong Kong visit was the most prolific of all. Having bought us 19 works in 2001 and just six in 2002, he truly outdid himself this year when gracing our streets with no less than 48 delightful pieces, including an 8-bit-style Bruce Lee, Hong Kong Phooey and everyone’s all-time favourite, Pac-man. All received rave reviews on social media and brought a smile to the faces of passing pedestrians, but the Hong Kong government seems to have systematically targeted the works, reportedly removing 80% in just a couple of months. This is not the first time Hong Kong graffiti art has been removed from the public’s sight and mind. Over the years the famous King of Kowloon, Tsang Tsou-choi, saw nearly all of his popular calligraphy work painted over, in 2009 French artist Christophe Schwarz (aka Zevs) was arrested for dripping removable paint down a Chanel logo in Central, and in 2011 pieces supporting dissident artist Ai Weiwei disappeared almost as soon as they were put up. [caption id="" align="alignnone" width="720"] 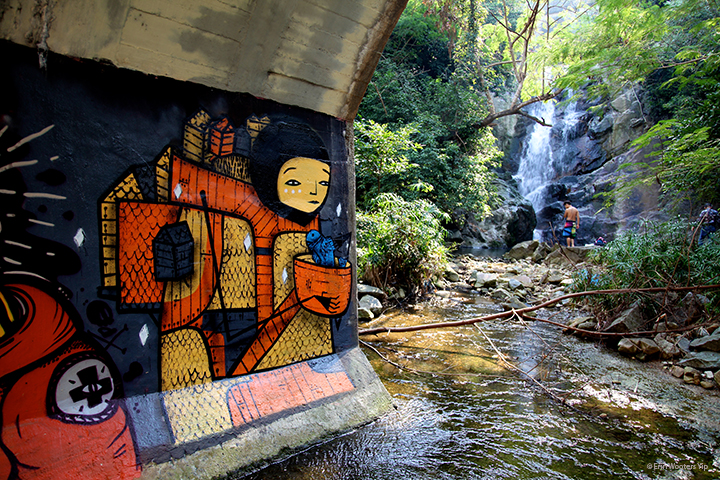 Most recently, a graffiti art oasis by a waterfall directly behind the Hyatt Regency in Shatin was also destroyed in a matter of months. The colourful large-scale pieces – the handiwork of various renowned international artists who gathered in Hong Kong for Above Second Gallery’s Neon Golden exhibition – were replaced with plain white paint. [caption id="" align="alignnone" width="600"] 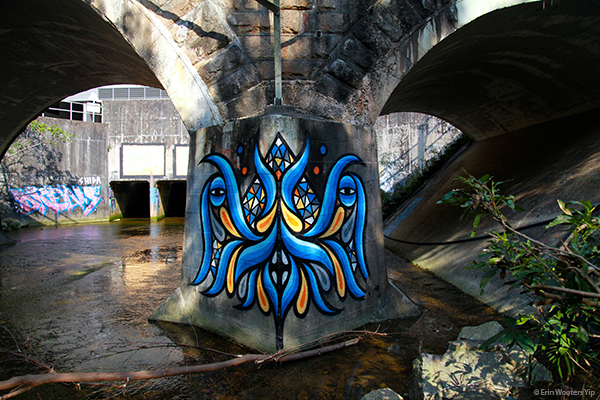 Local art lovers have condemned the government’s actions, but it does seem that tolerance of such urban art is not set at a fixed zero. Two pieces in the waterfall oasis that could not be seen from the adjacent public bike path were in fact left intact, and the Highways Department has apparently been told by the Home Affairs Bureau not to remove any remaining work of the King of Kowloon. Is this the government’s way of showing that they do appreciate street art after all? 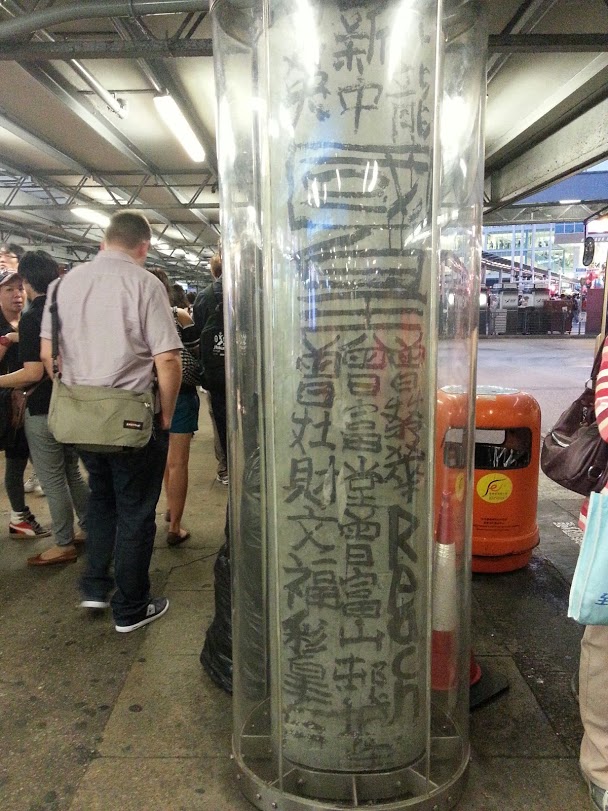 And it seems even the police are assessing graffiti on a piece-by-piece basis, although they clearly have little final say in whether or not a removal takes place. In a statement to the SCMP, Invader explained that he was approached by police officers when installing a piece in Hong Kong. “I told them, 'I am an artist and I did not ask for permission, but what I am giving is a gift. If you don't like it, you can take it off'. The police looked at my piece and said, 'No, we like it, you can keep it'... But they said don't put any up any more, so I went to Kowloon to continue." 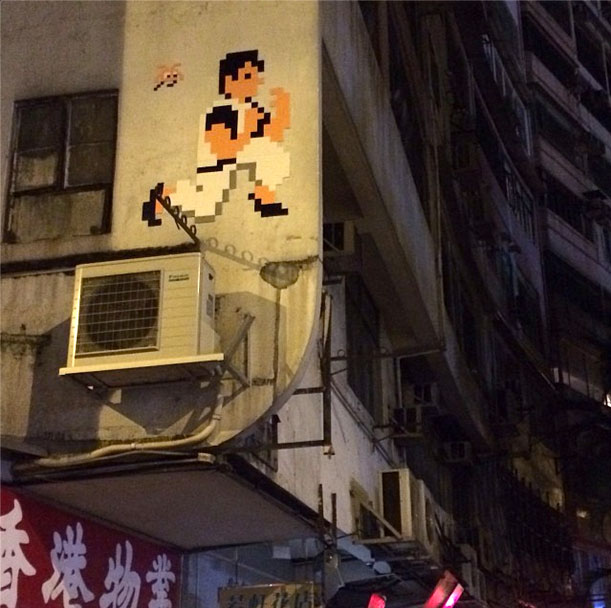 Hong Kongers complain that the removal of Invader’s artwork starkly contradicts the government’s stance on increasing art appreciation in our city. After all, isn’t good graffiti bringing art directly into the public sphere? “I really consider that my approach of displaying the pieces in the street is a gift to the city and its citizens,” Invader said in his statement. “It is a way for me to enhance people’s everyday life. They don’t need to go to museums or art galleries; they can just look up on the walls and maybe be touched by my urban acupuncture.” [caption id="" align="alignnone" width="600"] 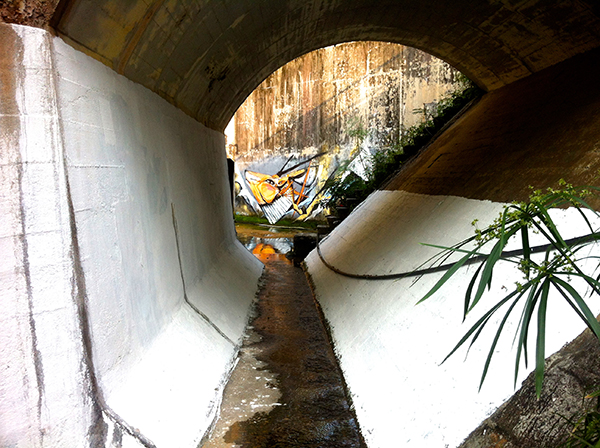 In defence of the government, graffiti is illegal in Hong Kong, so it is perhaps understandable that the authorities want to keep the city clean and void of anything that suggests a messy and unruly environment. But where do you draw the line between vandalism and striking pieces of public art that only act as enhancements to city’s beauty? Should we also be taking a stand against the evils of Yarn Bombing? Perhaps this question is too subjective, but in the case of Invader, a well-respected artist who has invaded more than 60 cities and had his work displayed in numerous galleries around the world, I believe an exception should be made. With billions of dollars being put into the West Kowloon Cultural District, it would only make sense for the government to take a more lenient stance on public art. 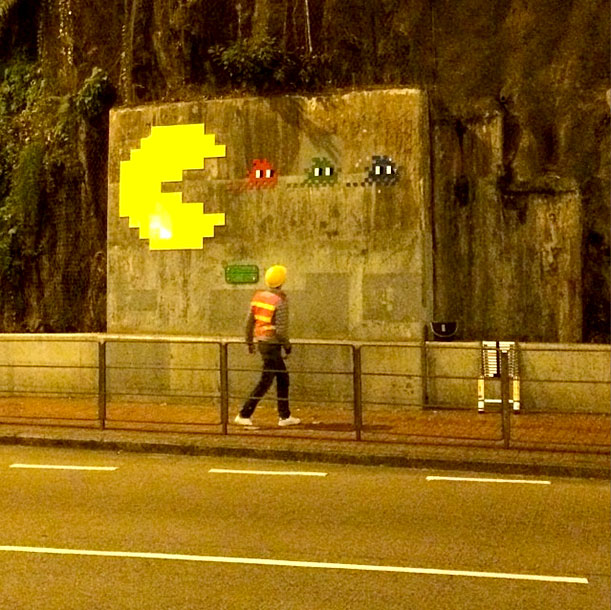 “To the Hong Kong authorities, incase they intend to wipe out the entire invasion colony, I only ask: What message would you send to your citizens? What modern cultural heritage do you want to leave them? What is the real place of art in your beautiful city?”