By brian_adams 17 October 2014
share:
The red gash left along the back of a demonstrator’s neck where his necklace was allegedly ripped off by a police officer is among a batch of photos accusing Hong Kong’s police of using excessive force when officers cleared Lung Wo Road Wednesday morning. 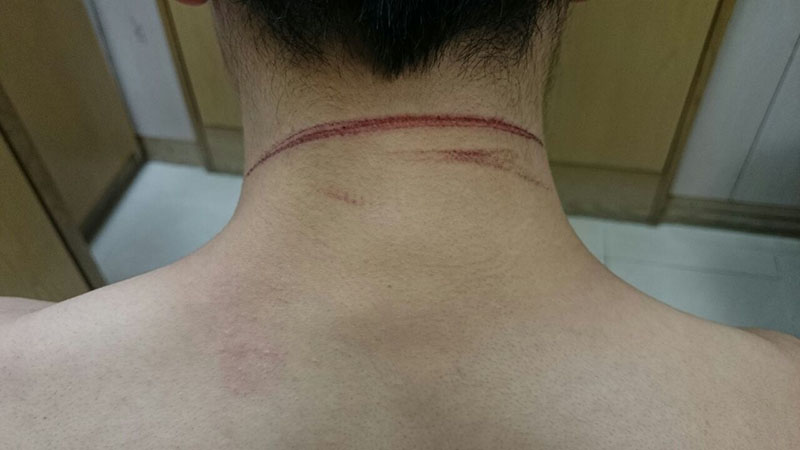 The pictures, released today by Occupy Central, depict six men, ranging in age from 20-26 years old, who suffer from scraped knees and cheeks, an injured eye, and a bruised lip. Occupy Central alleges that these injuries resulted from an “inappropriate” use of force by police officers in the early morning confrontation to disperse demonstrators from the roadway.

In a press conference Wednesday afternoon, Steve Hui, Chief Superintendent for the Police Public Relations Branch, described a chaotic scene resulting in 45 arrests. Five officers were injured including one suffering a dislocated shoulder after being pushed to the ground and another was injured in the corner of his eye with an umbrella. Hui denounced the demonstration as an “extremely irresponsible and dangerous” situation and described demonstrators kicking police, attacking officers with umbrellas, and throwing objects onto the street below from an overpass. Ken Tsang, a Civic Party member and Occupy Central demonstrator, was also allegedly beaten by Hong Kong police officers, during the demonstration, for roughly four minutes. The assault, captured on camera, caused public outcry and photos of the injuries he suffered launched a march, organised by social workers, on Police Headquarters Wednesday evening. Tsang addressed media that evening outside North Point police station, stating he was assaulted prior to the aired attack as well as in the police station. The officers involved in his arrest have been reassigned pending the conclusion of a police investigation.   Got anything you'd like Localiiz to share? Send us your stuff!
[button color="blue" size="medium" link="https://localiiz.us4.list-manage.com/subscribe/post?u=c2964a434922598f5d8ee53ff&id=07d327a2e8" icon="" target="true"]Subscribe to receive our weekly newsletter[/button]