Clowning Around With Peta Lily

May 3rd 2013: As award-winning performer Peta Lily brings her tongue-in-cheek anti-sex show Chastity Belt to Hong Kong, the one-woman whirlwind talks to Crystal Wilde about the daunting dating scene of the over-50s and the business benefits of learning to laugh at yourself. 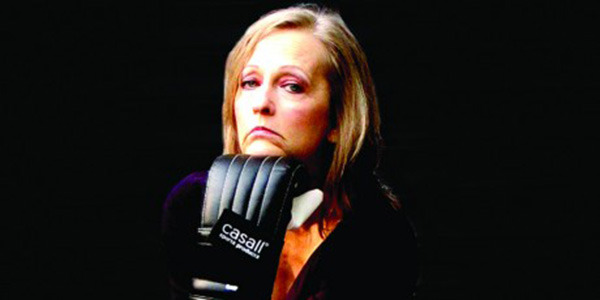 From hump-backed "camel-toe" crones to Essex-style Aristophanes and trying on testicles, Peta Lily’s one-woman show Chastity Belt is as up-the-wall as it is on-point. The crackpot creation, appearing for two nights only at Hong Kong’s Fringe Club, takes audiences through a hilarious hodgepodge of the personal, historical, mythical and downright weird on an older woman’s reluctant journey into chastity. Speaking to Localiiz, the 57-year-old London-based Aussie explained the inspiration behind her rhythmically raunchy offering. “Like any a lady of a certain age, I find dating scene nightmarish,” said Peta. “I read all the articles telling me to do this, don’t do that, lower your expectations, but after a while I just gave up. I realised it’s a loser’s game as an older woman trying to find love in a busy metropolis, so I decided to stop playing the game and started writing about it instead.” Back in Hong Kong after a long hiatus since her last appearance at City Hall in the Moby Dick-inspired Whale, Peta says that staying in risky Wan Chai during this trip seems particularly pertinent. “Wan chai is a fantastic place to be because it’s so local and gritty. But every night I walk past the pink neon signs and the half-naked ladies and think, if they only knew I'm doing a show about chastity. “I see these guys strolling around with a girl on each arm, but where can us women step out with two doe-eyed men? I couldn't do it because I would know it’s a trade, a business transaction, but I just feel the whole of society is made for men. God is having this great big joke where men are all about the hunt, but the minute they achieve their end a lot of them check out.” Not a woman to be beaten however, punchy Peta explained that after the breakup of her marriage several years ago it was her love of theatre, not any man, which finally bought passion back into her life. Aside from touring with her popular self-penned shows, Peta also runs business coaching classes and clowning workshops that inspire confidence and creativity. Talking about how Hong Kong business leaders can use theatre and clowning techniques to improve their posture, boundaries and public speaking skills, Peta said, “I find most leaders get to where they are because they've been good at their previous job. Then suddenly they're the head of a global team and they feel like the ground has been taken from underneath them. Everyone here has jobs, responsibilities and fast-paced lives, but we all feel a bit uncomfortable sometimes.

“It's about allowing people to play again,” explained Peta. “Clowning is all about failure, as the only failure as a clown is the failure to acknowledge the failure. If something goes wrong, you don't pretend it's not happening. You talk about it and include it."