By Localiiz 22 August 2013
share:
August 22nd 2013 By Priyanka Boghani He spins the wheel of his dissembled bike before turning to its frame to tweak the loose screws. A sea of spokes, hanging metal frames, racks of backpacks and a spread of bicycle accessories surround him. Not everyone can make their profession their playground, but Brian Fu, owner of Hong Kong’s first fixed-gear bicycle shop, RDFX Cycling, has managed to do exactly that. 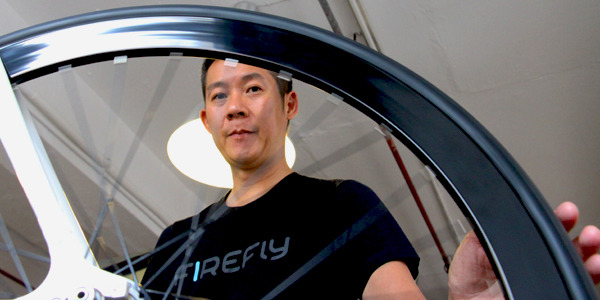 Brian Fu, co-owner of RDFX Cycling
In the two-wheel world of Hong Kong, Brian is often dubbed “The Godfather of Fixed Gear Bikes” due to his obsession with everything related to the “fixie” scene. A fixie is a minimized bike with little more than a metal frame, two wheels, two pedals, handlebars, one gear and no brake. Unlike a typical bicycle, a fixie bike doesn’t have a freewheel. The pedals are attached to a fixed gear on the hub of the rear wheel, meaning that if you don’t pedal, you don’t move. To stop the bike, riders must pedal backwards before skidding to a halt. Fixed gear bikes were originally used by couriers in New York and San Francisco in the 1970s, but over the last few years they have enjoyed a resurgence in pop culture to become a hip street fad. Their skeletal form also makes them more affordable, ranging in price from HK$4,000 to HK$8,000 at RDFX Cycling. Brian first came across the bikes while studying in the US and was inspired to bring their sheer simplicity back to Hong Kong. Despite working in TV production for 10 years, Brian never stopped nurturing his passion for cycling, penning a blog about the fixie scene and eventually opening the city’s first fixed gear bike shop. “I noticed that there was very little information on the fixie scene in general in Hong Kong, so anything that I’d find, I would post on my blog every day,” said Brian. “Soon I was getting emails from people asking me where they could buy fixed gear bikes, so I decided it was time to open up a shop of my own.”   Brian and his business partner Eric Lee opened RDFX Cylcing Boutique and Workshop in 2009. The shop, located in the Kwun Tong district, sells custom-made bicycle frames and offers consultation on bike material, paint and geometry. 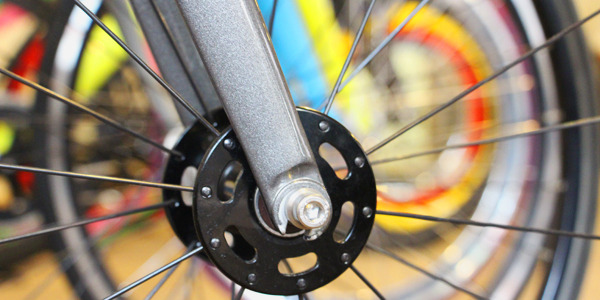 The partners are also heavily involved in many cycling events in Hong Kong. Most recently and impressively, Brian single-handedly brought Hong Kong’s first bicycle film festival to fruition. “In my spare time I love watching films, so what better way to combine my two passions than bringing a festival that celebrates both bicycles and films together?” said Brain. Taking advantage of the city’s newfound biking fever following Hong Kong’s first cycling medal win at last year's London Olympics, the Bicycle Film Festival saw 10 independent cycling films - handpicked by the New York Bicycle Film Festival organiser – screened at Hong Kong Art Centre between January 11th and 25th this year. Around 800 people attended the inaugural event, and Brian hopes to gather enough sponsors and funding to host another festival next year for the growing cycling community in Hong Kong. The 44-year-old fixed-gear guru is pleased to see ever-increasing packs of cyclists cruising around Hong Kong’s urban terrains. Brian favours the hilly and scenic routes around The Peak and Shek-O, but admits that the best cycling experience of his life did not occur in Hong Kong. “A few months ago I spent four days cycling from Tokyo to the northern tip of Japan with a group of friends,” he said. “One day I clocked up 270 km in 12 hours. To date, that’s been the longest period of cycling that I’ve ever done!”

He next plans to take on the unforgiving mountains of Columbia. “Cycling gives me the freedom to go anywhere. As long as my body can take me, I’ll keep riding.”