By Brian Adams 6 January 2015
share:
Two-year-old Henry Li has a new partner is his cancer battle – the Hong Kong Philharmonic Orchestra. The young Hong Konger’s mother is a violist in the orchestra and her colleagues are staging a fundraiser later this month to assist with the cost of her son’s ongoing medical treatment. 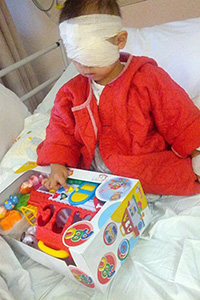 Diagnosed with bilateral retinoblastoma in both eyes on New Year’s Eve 2013, Little Henry as he is known on Facebook, underwent cycles of chemotherapy. The cancer proved to be as aggressive as the therapy and robbed Henry of his left eye, which was surgically removed. The cancer in Henry’s right eye continues to advance, requiring further treatment. Doctors are pursuing a new course of treatment at Wills Eye Hospital in Philadelphia, to save Henry’s remaining eye, but the care is costly. Brachytherapy, a form of radiation therapy, requires placing radioactive pellets in a small carrier which surgeons stitch to the eyeball, directly in or near the cancer. A representative for the Hong Kong Philharmonic said Henry’s mother, Ming Li, believes the fundraiser will lift her son’s spirits as he prepares for his possibly sight-saving surgery. The fundraising concert, presented by the Y.S. Liu Foundation on January 15th at 8pm in the Hong Kong Cultural Centre Concert Hall, will feature the Hong Kong Philharmonic’s Music Director Jaap van Zweden conducting Tchaikovsky’s Serenade for Strings and Dvorak’s Symphony no. 9, from the New World. Admission is free, but donations are encouraged by the two methods detailed below.