Boxed In: Feeling Small on an Eye-Opening Tour of Hong Kong’s Container Port


Despite dropping from the top spot to the world’s third-busiest port in 2004, Hong Kong’s container port - with 8,500 metres of frontage and a total handling capacity of more than 23 million units per year - is still a presence of gargantuan proportions. We join Hong Kong Yachting and become a mere drop in the ocean on a tour of the Kwai Tsing Terminals and the Rambler Channel. 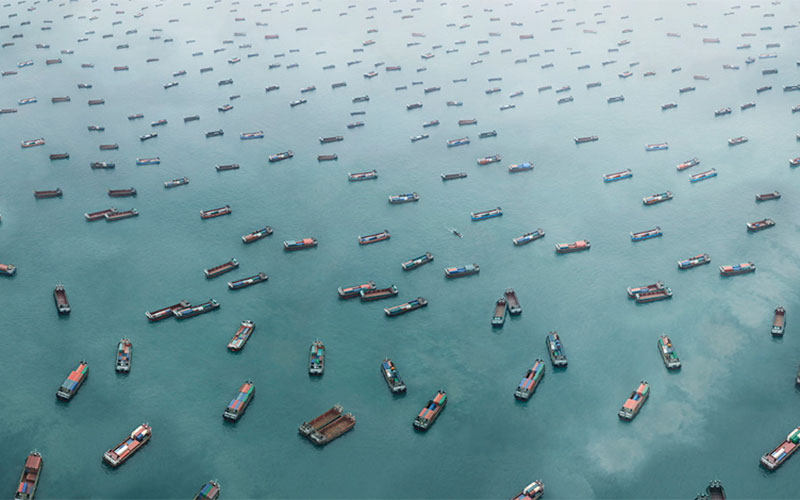 The development of containerisation after WWII is often hailed to be as much of a global economic game changer as aviation, electronics and even the internet. The waterfronts in major port cities like London and New York turned to wastelands, as those who couldn’t convert their operations quick enough to handle the huge increase in movement and material rapidly went under.

While manufacturers previously had to be geographically close to their customers and were protected from non-local competition by high freight rates, sales on a global scale suddenly became possible and appealing. One of the biggest beneficiaries of the changes has been Asia, which now hosts eight of the world’s top 10 busiest ports.

Despite both movements and tonnage increasing by 30% in the last decade, Hong Kong’s deep water port now sits in third place in the world in terms of activity, just behind Singapore and Shanghai. First opened in the 1970s, the nine Kwai Tsing Container Terminals at Kwai Chung, Stone Cutters and Tsing Yi Island reached their peak in 2007 when they handled a record 23.9 million TEUs (20-foot equivalent units of containers). 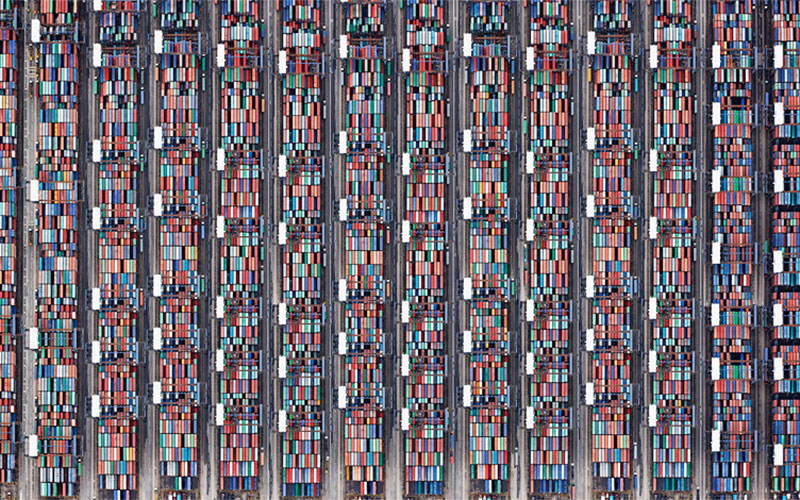 Although it now averages a measly 18 million TEUs a year, this seldom-seen slice of Hong Kong is an eye-popping hive of activity 24 hours a day. Setting off from Central, we jumped aboard one of Hong Kong Yachting’s regular tours and headed for the north-western corner of the harbour.

Before we even reached the port proper we found ourselves among huge container ships, the biggest of which hold 15,500 TEUs. As we strained our necks to take in the mass of multicolored fiberboard boxes, we noticed many were being transferred to much smaller flat bottom barges. 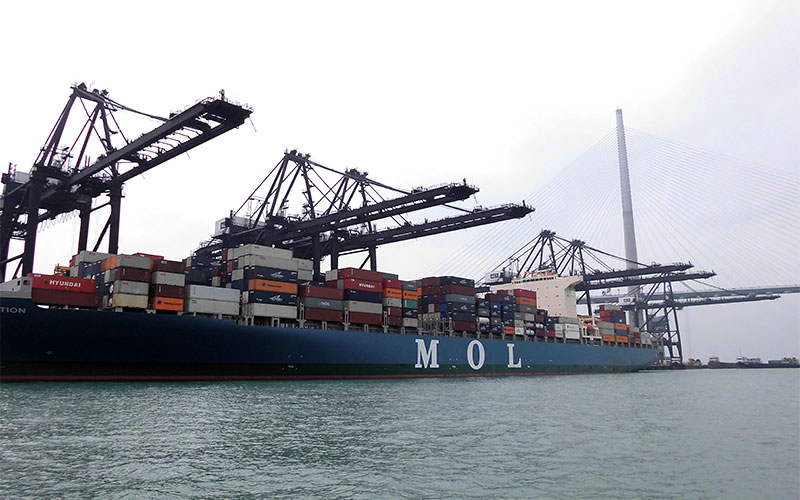 Our skipper, Angus, explained that 20% of all container movements in Hong Kong are handled ‘mid-stream’, as manufacturers dodge handling fees in favour of unloading containers to one of 11 nearby wharfs via privately owned boats. Hong Kong is in fact the only port in the world with this level of midstream operations, and the onshore yards alone occupy a total land area of 27.5 hectares.

Next we made our way up the Rambler Channel, which Angus told us is the busiest shipping channel in the world due to the combined traffic from the Pearl River Delta. Here we marveled open-mouthed as the huge automated cranes grabbed and dropped the now tiny-seeming containers into place at a remarkable speed and in a manner reminiscent of the cuddly toy claws seen in amusement arcades. Although it may look reckless to an onlooker, there is apparently less opportunity for error when the boxes are released swiftly.

All too soon our time in the container port was over, but there was one more unorthodox treat for us in store. After a fantastic onboard barbeque and buffet, we moored up Ma Wan (Park Island) and were given some shore leave. 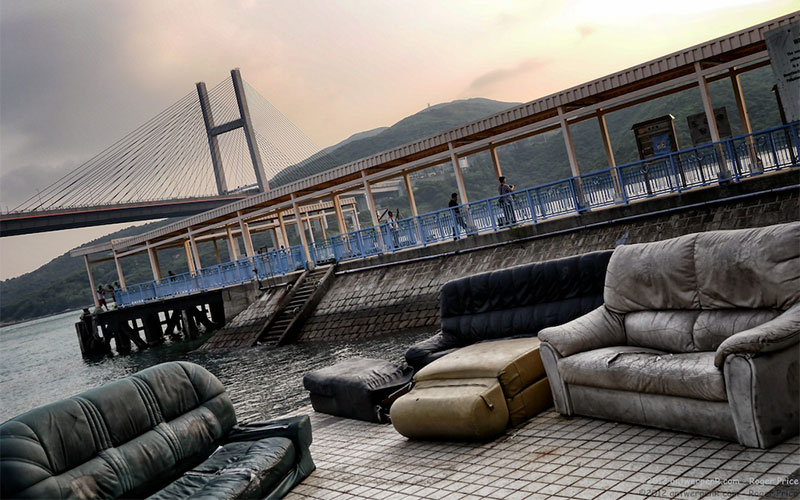 Referred to by some as Hong Kong’s ‘Ghost Town’, Ma Wan village, home to thousands of fishermen and their families for 250 years, was forcibly abandoned in 2007 due to the development of the overlooking gated housing estate. Once boasting its own school, seafood restaurants and a clinic, Ma Wan Village now consists or an eerie collection of dilapidated buildings, some of which are falling into the sea, some of which are plastered with signs bearing “Government Property” and some of which are totally open for exploration.

With rusting bicycles, molding sofas and even some kitchen equipment left behind here, it’s almost like the scene from a post-apocalyptic movie or a US nuclear test town. However the site is not completely devoid of life, as among the empty shells are signs that some may in fact still live here, refusing to give up their homes on government orders. 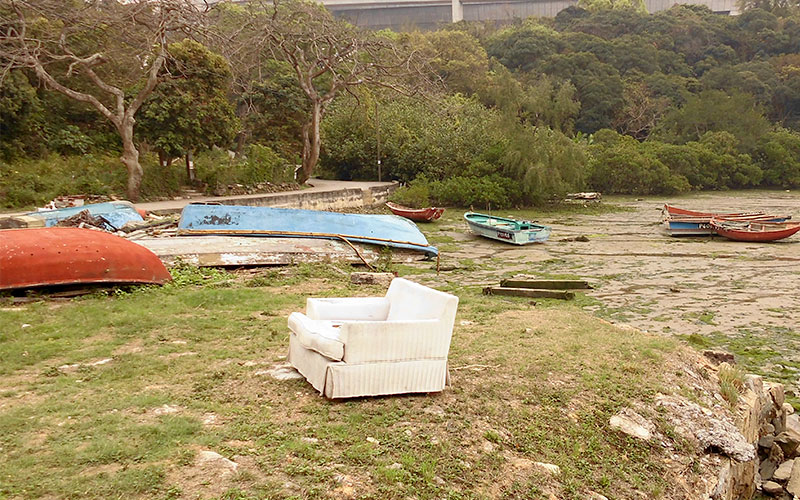 Seeing both the container port and the abandoned village in one day was a truly eye-opening experience, and one that I’m sure would equally enthrall Hong Kong locals and first-time visitors to the city. No matter how many times you come here or how many years you’ve lived here, there’s always something left to discover.

The next container port tour with Hong Kong Yachting is on April 13th, with pick up at Central Pier 10 at 11am. The five-hour trip costs HK$795pp, including lunch and free flow wine, beer and soft drinks. For more information or to book a spot, call +852 2526 0151 or email via their Localiiz profile page.