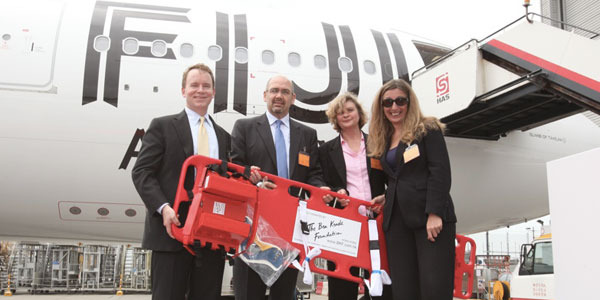 The Ben Kende Foundation was established to support Ben Kende, a rising rugby star who suffered a spinal injury while representing Hong Kong in the Under 18's Championship in Bangkok in 2010. Ben is now a quadriplegic, studying for a Bachelor of Commerce at Sydney University and working hard at his physiotherapy, trying his best to regain some of what he has lost. The Foundation has brought together a movement of teachers, doctors, friends and the rugby community. They are trying to make Hong Kong a better place for the disabled by challenging mobility issues, raising money to help with medical equipment for other rugby communities in Asia and Oceania, supporting clinical stem cell trials, and of course raising funds to pay for Ben's rehabilitation and equipment. More than HK$100,000 was raised at the annual Ben Kende Fund Raising Ball in November 2012, held specifically to raise money for spinal boards for the Fijian, Tongan and Samoan Rugby Unions that desperately need the equipment. “We feel honoured to be a part of this generous donation to our rugby-loving islands,” said Dave Pflieger, Air Pacific’s Managing Director and CEO. “Hong Kong and rugby have a special place in all Fijian’s hearts—this donation will only serve to strengthen those feelings. On behalf of the Federation of Oceania Rugby Union, I would like to thank The Ben Kende Foundation and the Hong Kong Rugby Football Union for making this possible.” Fijian rugby legend Waisale Serevi expressed his thanks to the Foundation for their generous support, as well as to Air Pacific (soon to be Fiji Airways) for transporting the spinal boards along with other medical equipment generously donated by Event Medical Services. These essential medical supplies will soon be out on the playing fields to help reduce injuries in the future. Dr. David Owens and Lucy Clarke of the Hong Kong Rugby Football Union (HKRFU) have pledged to further build on this initiative and assist with future pitch-side medical training courses in Fiji, Samoa and Tonga. They will also look to expand the programme to other countries within the Asian region in the years to come.

“The co-operation of dedicated volunteers, a generous community, the inspirational story of Ben Kende and the support of the HKRFU and Air Pacific demonstrate the best values of the sport of rugby: what real teamwork can achieve,” Owens and Clarke said.