Behind the Scenes of The Last Fortress of Occupy Central

By Sophie Pettit 12 December 2014
share:
Hoards of protesters lined Harcourt Road yesterday morning, anticipating the arrival of police officers to clear the last remaining camp of Occupy Central. We ventured deep into the heart of the barricades to meet the passionate Hong Kongers fighting until the end for democracy in their city.

After almost two months of political demonstrations, hundreds of colourful tents still laid scattered in a patchwork formation, filling the street, while bright yellow banners hung high, rippling from bridges, street lamps, and in the hands of protesters, declaring "WE'LL BE BACK" and "WE WILL FIGHT UNTIL THE END". The message was loud and clear – whatever the outcome of this landmark day, the fight for democracy in Hong Kong is far from over. 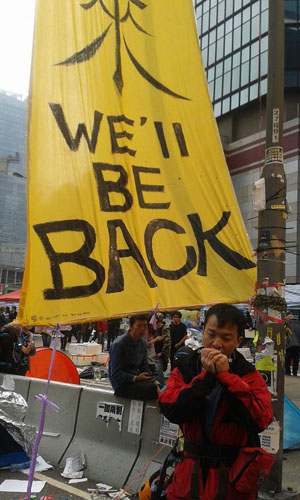 Tired and deflated, 35-year-old, born and bred Hong Konger, John Pang, took a break from playing his harmonica beneath a yellow flag and spoke with us. “This is the last fortress of our movement, we lost Mong Kok and Causeway Bay, and this is our last stand,” he told us. Pang has been supporting the Occupy movement since the very beginning when he saw the news break on his television at home. He has been camping here in his tent around three nights a week, beside a giant yellow umbrella on the arching back of the flyover, adjacent to the Government headquarters and the Chief Executive’s office. A former Auxiliary Medical Service member, Pang has been volunteering his first-aid services to the demonstrators, using his own equipment from underneath his bed. “I believe this is my vital role in this political movement", he said. Only a week ago, during the violence in Mong Kok, he witnessed several protesters being hit with batons by the police before he himself was pepper sprayed. With the sound of beating drums and chatter filling the air, Pang told us that he anticipated the police would be clearing the site successfully and hoped there wouldn't be too many injuries in the process. So what's with the harmonica? “I wish to release my emotions during this time and playing my harmonica is my way of doing this, while encouraging others who I have built strong friendships with in our time here", he explained. "Last night I played Auld Lang Syne to say goodbye to my friends and show them that I treasure them – always.” 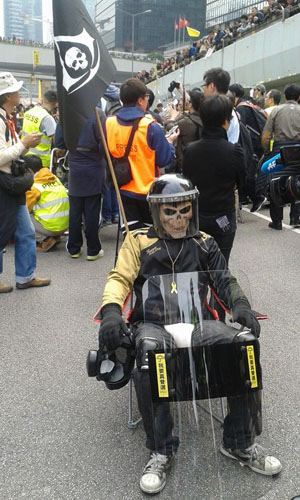 Next up, we met 28-year-old window repair man, Leo Chan, donning a menacing skull mask and body padding, and holding a black skull and crossbones flag as he sat stoically in a chair at the entrance to the camp. The self-appointed gatekeeper to the camp, Chan had one prime focus – to protect the students behind him as he awaited the arrival of the police. With tension rising, the impending police action began to raise serious concerns for 23-year-old designer, Kayi Kwok. "I'm here to see how the police will handle this situation," she told us, among clusters of young protesters, in the final hour leading up to the arrival of law enforcement. "I have been down to the Occupy site almost every day since the start of the movement. Today marks our last chance to fight for our rights and I want to be here to witness what the police will do and see whether they will resort to violence. I hope not." Less than an hour later, officers arrived at the camp and used wire cutters to make their way through the tangled barricade and dismantle the bamboo scaffolding, releasing groups of police into the camp. One by one the demonstrators were taken away, some walked, some hung limp in the arms of policemen, some chanted, and others remained quiet as they walked between rows of camera flashes which lit up the darkening sky like lightening. As night fell on Admiralty, the buses took them away in their droves. The last fortress has finally fallen. Read more! Explore the rest of our Culture section.

Sauced Up: A history of Hong Kong’s homegrown XO sauces

The Best Places For Live Music in Hong Kong

Cantonese Slang of the Week: Act Like a Crab