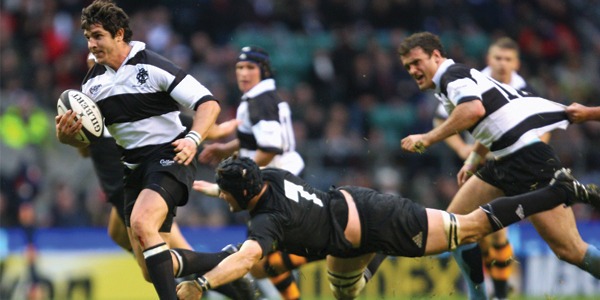 The Barbarians have finally confirmed their killer squad for their two-match summer tour, which will see the famous invitational side take on the British & Irish Lions in Hong Kong on June 1st. The latest additions to the squad of 28 players, drawn from a dozen nationalities, include Saracens' hooker Schalk Brits, Fijian winger Timoci Nagusa, Wallaby lock Dean Mumm, US Eagle Samu Mano and Racing Metro’s prop Andrea Lo Cicero. London Wasps' utility back Elliot Daly also joins his club mate Sam Jones as the third and final uncapped member of the squad. Hong Kong's own Rowan Varty also made the team, fresh from success in the HK Rugby Sevens Bowl final. Tour manager Derek Quinnell said: “We are very pleased with the final composition and strength of the squad. Obviously because of play-off finals in Ireland and England on May 25th a handful of players will not be available for the first match against England, but we have covered that by inviting 28 players. We also believe there is a healthy balance between proven test experience and promising young talent who will benefit enormously from the experience.” The Barbarians are generally regarded as the world’s most famous touring club. Since the club’s inception more than 120 years ago, players from 31 nationalities have had the honour of donning the distinctive black-and-white jersey. The team’s travels have taken it to 23 countries, including Hong Kong on six occasions. In 1981, the Barbarians won the prestigious Hong Kong Sevens at their first attempt, defeating Australia in the final. The Barbarians kick-off their tour against England at Twickenham on May 26th before flying to Hong Kong for the historic encounter with the British and Irish Lions on Saturday June 1st at the Hong Kong Stadium. The Barbarians last played the Lions at Twickenham in 1977. The Final Barbarians Squad Backs Jared Payne (Ulster) Rowan Varty (DeA Tigers & Hong Kong) Takudzwa Ngwenya (Bairritz Olympique & USA) Timoci Nagusa (Montpellier & Fiji) Joe Rokocoko (Bayonne & New Zealand) Elliot Daly (London Wasps) James Hook (Perpignan & Wales) Nick Evans (Harlequins & New Zealand) Kahn Fotuali'i (Ospreys & Samoa) Dwayne Peel (Sale Sharks & Wales) Dimitri Yachvili (Biarritz Olympique & France)